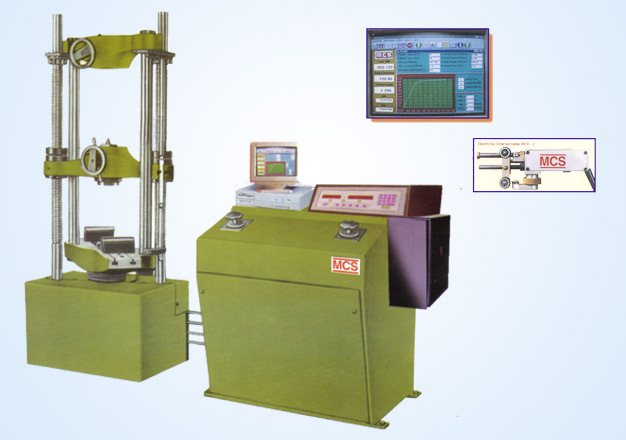 We manufacture computerized universal testing machines for all industries. These machines are highly result oriented and long lasting.

Principal of Operation : Operation of the machine is by hydraulic transmission of load from the test specimen through pressure transducer to a separately housed load indicator. The system is idea since it replaces transmission of load through levers and knife edges which are prone to wear and damage due to shock on rupture of test pieces
Load is applied by hydrostatics y lubricated ram. Main cylinder pressure is transmitted to the pressure transducer housed in the control panel. The transducer gives the signal to the electronic display unit, corresponding to the load exerted by the main ram. Simultaneously the digits electronic encoder fitted on the straining unit gives the mechanical displacement to the electronic display unit. Both the signa s are processed by the mcroprocessor and load and displacement is dsp ayed on the digits readouts simultaneously.

Machine consists of Straining Unit : This consists of a geared motor with chain & sprocket drive and a table coupled with the ram of the hydraulic cylinder, mounted on to a robust base. The cylinder and the ram are individually apped to eliminate hid on The upper cross-head is rigidly fixed to the table by two strengtaned columns.
The lower cross-head is connected to two columns which are driven by a motor Axia loading of the ram s ensured by relieving the cylinder ram of any provision side loading by the provision of ball seating
An displacement scale with a minimum graduation of 1 mm, is provided to measurethe deformation of the specimen. Tension test is conducted by grpping the test specimen between the upper and lower cross-heads.
Compression transverse, bending shear & hardness tests are conducted between the lower cross-head and the table. The lower cross-head can be raised or lowered rapidly by operating the screwed columns, thus facil rating ease of fixIng or the test specimen. Control Panel :The control pane consists of power pack complete withdr ve motor and an oil tank control valves and electronic display unit.
Power Pack :The Power Pack generates the maximum pressure of 200 kgf/cM. the hydraulic pump provides continuously non-pulsaating oil flow Hence the load application is very smooth.
Hydraulic Controls : Hand operated wheels are used to control the flow to and from the hydraulic cylinder the regulation of the oil flow is infinitely variable Incorporated n the hydraulic system s a regulating valve which maintains a practically constant rate of piston movement Control by this valve allwows extensometer readings to be taken. 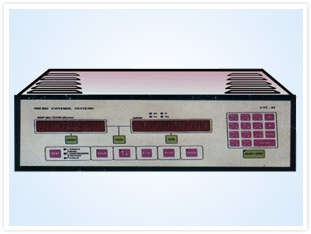 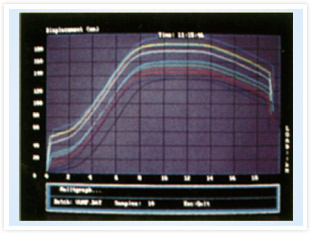 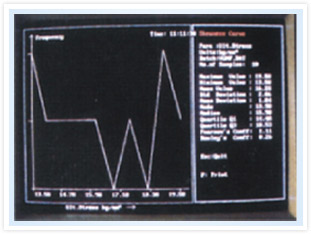 Serial Communications Software. MCS-MP series control panel can be connected to any PC using RS-232 commun cat on port. MCS offers window based software on PC to enable the user to effectively evaluate different parameters. The Features include

Measuring System with PC Add on cards MCS-PC. - In MCS PC model, the measuring system is based on two PCB's inserted in PC motherboard slots. All the system features are same as MCS-MP with serial software. 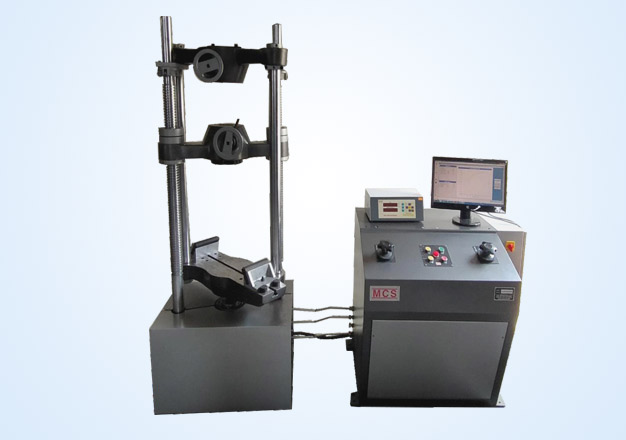 In today's days of automation, existing mechanical dial type Universal Testing Machines are getting obsolete. More ever it takes plenty of time for testing. Plotting of graph required test in different units is still difficult. Evaluation of important Parameters like proof stress. Young's modulus is very tedious and time consuming.


Measuring system with eletronic Control panel : MCS-MP is a state of the art micro processor based unit specially designed for Universal Testing Machines with digital display of Load and Displacement / Extension.

Evaluating Proof Stress : Electronic Extensorneter : MCE 2 is a strain gauge type, extensometer to measure material extension with a resolution of 1 micron. It is designed to be clamped directly on specimen. This is used to measure strain up to elastic limit to determine important parameters like 1% to 1% proof stress and Young's modulus, MCE 2 has two fixed gauge lengths of 25mm and 50 mm. Change of gauge length is by means of replacing button knife-edge extender, MCE 2 is fabricated from high strength fight weight aluminium with a durable anodized finish. The knife-edges are made from oil hardened tool steel to withstand heavy usage. Supports maximum dia of 40mm & maximum extension 2mm

Panel Control Mode : Micro processor panel works independently. It shows load, disp. and extension on control panel. It has membrane keyboard or data entry. All specimen related parameters can be entered In to the control panel. At the end of the test one can entered see all test results on front penal display. Load vs Disp. graph can be directly obtained on dot matrix printer.

Every UTM Thas manually operated hydraulic valve. which controls rate of loading. It is very difficult to achieve required rate of loading manually. Due to stringent testing requirements, it is required to conduct tests at specified load rate or strain rate. MCS has developed servo system where above loading valve is converted into a motorized valve by using stepper motor. A special windows based software controls this valve and the operation of the machine.

Servo Control with MOOG Valve:
Instead of stepper motor, a MOOG valve can be used for precise load rate control